At Sunstar, we have been over 30 years researching into how periodontal disease and diabetes are connected.

World Diabetes Day was created in 1991 by the International Diabetes Federation and the World Health Organization in response to growing concerns about the escalating health threat posed by diabetes. It is marked each year on 14 November.

Sunstar is not new to the field of oral health and diabetes. Sunstar has been promoting and supporting research for over 30 years now due to the personal story that links diabetes to the family of its founder who sadly passed away due to a complication of diabetes in his fifties.

Ever since, the company, through the Sunstar Foundation, has been contributing to research and raising awareness about the two-way relationship between oral health and general health, particularly about periodontal disease and diabetes. 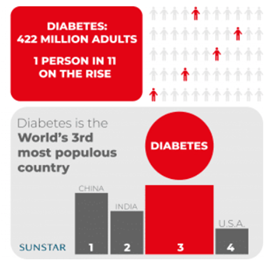 Learn more here about all the initiatives SUNSTAR is carrying out across the globe, in association with the EFP, during the #DiabetesMonth.

Contact us if you have any questions about the GUIDOR products.

We strive for your oral rehabilitation.